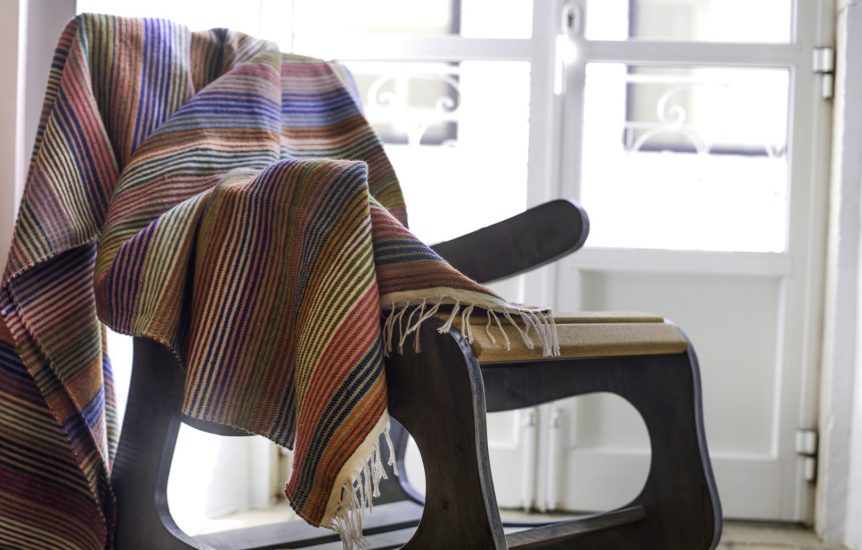 By Tânia Soares On 26 November, 2019 In Mar d'Estórias, Products, Tradition

Every story has its beginning. For simplicity we could say that a blanket begins at the end of a ball of yarn and ends in a trousseau in a newlyweds’ house. But there is a beginning, a middle, and an end, as well as the protagonists who cannot be missing in a text that has as its theme the Alentejo Blankets.

In order to discover all the secrets and stories of the Alentejo blankets, we would have to sit on a loom for long days. Beside us could be a storyteller, very Alentejo-style. Nor would he know where to begin, but as a characteristic of that people, he would never choke and start at the very beginning, with the transhumance! He would say, formerly there were the transhumance paths through which everything and everyone passed. Herds, knowledge, tales, songs, and traditional stories. There were paths reserved for the animal transhumance, in search of the best pastures during a certain season of the year, but they also served as a path of knowledge. “On the transhumance paths, there were spots for resting and drinking water”, the storyteller would still be saying. These spots were also meant for shearing sheep, and the wool was washed right there near Monsaraz, in the Guadiana river. It is impossible to know the exact moment when the blankets began to be woven, or who began this task. Initially, the blankets covered the shepherds who travelled with their herd and covered entire families at night already in bed. For some, the blankets were also part of the salary, as an exchange currency or for personal enjoyment. They soak in an olive oil bath for days, then dried out in the sun and become impervious to the winter days.

The use of blankets dates back to the thirteenth-sixteenth century to this day, with no temporal interruption, just a few ups and downs along the way. Through the lands of Reguengos de Monsaraz we can hear the same sound that was heard many centuries ago. It is with a music compass, always with the same rhythm that we are welcomed with in the Fábrica Alentejana de Lanifícios in Reguengos de Monsaraz. There are four pedals that move the merine wool web and weft, with the help of the hand shuttle and the comb to unite all that thread crossover. There are also four weavers who mechanically move the looms. The mechanics and the strength come from the Reguengos’ blanket weavers’ arms. They are the four guardians of a tradition that goes far beyond any home decor.

Mizette Nielsen, a Dutchwoman who came to a country with rigid customs of a recent dictatorship, decides to buy an almost forgotten factory in the middle of Alentejo. In the year of 1976, it was unthinkable for a woman to wear trousers and go to restaurants by herself. For a Dutch woman who had never experienced such inconsistency, she could have turned back and said that she had been mistaken. But tenacity prevailed and made her presence felt in the Alentejo society and headed the factory with only men weavers. She succeeded in a mostly male and Portuguese world.

When Portugal got into the CEE, many Portuguese companies faced a holdback, the wool factory as well. People were looking for what they had never had access to, leaving behind national products. Some companies closed, but not the wool factory! Mizette reinvigorated the products, the blankets turned into rugs or wall decoration, made pillows and introduced new patterns. Nowadays the factory is no longer in the same building where it started in the nineteenth century, it now occupies an old mill.

If it was once a craft of the male world, it is now entirely feminine, and it is they who hold a unique treasure in Europe. These days, the factory provides products to architects, hotels and renowned designers such as Kenzo Takada.

By now our storyteller has already lost his train of thought, but he knows and guarantees that talking about the Alentejo blankets without putting a foreign name ahead is inevitable. Mizette came with an intention to not leave the Alentejo millenary tradition to die, and as far as we’re concerned, we should only support her.

Find the products in our online store: