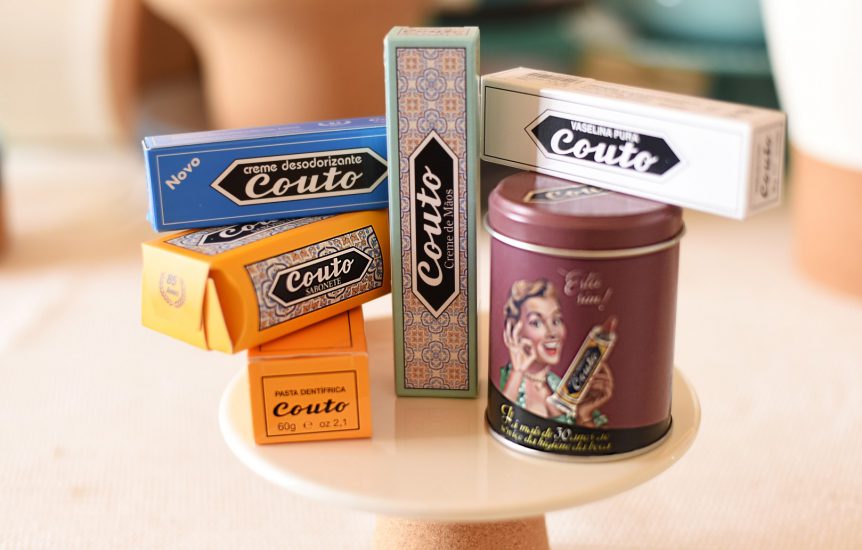 We must go back to the end of the World War I (1918) to find, in Porto, the pharmacy that would create the emblematic Pasta Medicinal Couto (Couto Toothpaste).

At a time when the country was closed to itself, Alberto Ferreira Couto, advised by a Portuguese dentist living in Brazil, tests and creates the formula that would be a success for promoting “strong teeth, healthy gums and healthy mouth.”

The toothpaste that continues “to be in everybody’s mouth” has kept its formula unchanged to date – it is not tested on animals, doesn’t contain any animal ingredients, or SLS (Sodium Lauryl Sulfate, classified as a carcinogen).
In its composition was incorporated potassium chloride, to eliminate the gum infections, and to avoid its retraction by a common disease of those years – syphilis.

Pasta Dentífrica Couto (as it is now named) is imprinted in the memory of the Portuguese people, not only for the undoubted quality but also for its founder’s vision, who has always believed in the power of publicity.

Everyone remembers the famous advertisement of a juggler holding the chair with his mouth.

The idea came from Alberto’s nephew, the current owner of the brand, Alberto Gomes Silva, who has worked in the company since he was 17, and inherited it when his uncle died, in 1974.
Nowadays, at the age of 80, Mr Gomes Silva accompanies the daily production process of this family project that continues to bet on a formula made “in an old-fashioned way.” When it was launched in 1932, the toothpaste was produced in the pharmacy, where the components were mixed with a spatula and the mortar, as well as, the workers manually filled the dentifrice tube. After that, and due to increased demand, Mr Gomes Silva hired a locksmith service to build the first machine to automate production and today uses a modern laboratory but remains faithful to the old recipe and a semi-artisanal production.

Couto only launched new products in 1969, this time with the introduction of two mythical products: the Restaurador Olex (restores the original hair colour) and the Petróleo Olex (anti-dandruff hair and hair strengthening tonic).

Times change, however, the original design that marked the Portuguese society of the twentieth century continues to be present in all Couto’s products, who recently also launched men items, aromatic candles and luxury packages with the famous retro box. Couto plays a significant role in our social and economic history, not only for producing all these products but for its social conscience. The creation of the Couto Foundation in 1974, located on the land where the former residence of Alberto Ferreira Couto was established, now houses 400 local children in need.

It is this challenge to build memories in the Portuguese people that Mar d’Estórias exalts.