The Life Of A Barnacle Catcher | Mar d Estórias 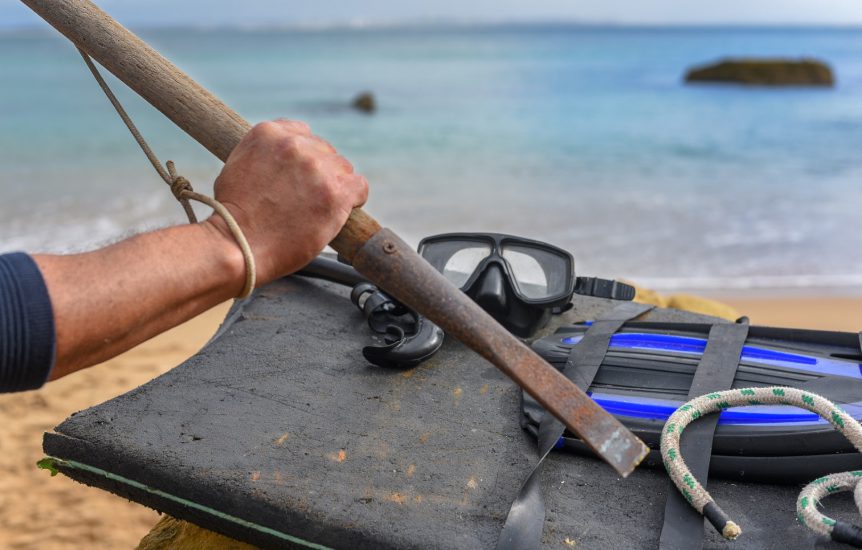 By Filipa Glória On 1 February, 2019 In Articles

The Life Of A Barnacle Catcher

The breaking of the waves allows us to guess the force of the tide, at dawn. Francisco Cruz admires the ocean foam from the top of a steep cliff while wearing his diving suit to challenge another tide in search of the true fruit of the sea – barnacles. As a professional shellfish catcher, Chico, as he is known, risks his life every day to collect his livelihood on the Costa Vicentina.

The knife instrument (arrelhada) and a net bag are the only workmates in these turbulent waters of the Atlantic Ocean. His courage is the size of the world and only comparable to his connection with the sea: “in my body, I have salt water instead of blood,” he says.

At 48 years old, Chico has been at sea for more than 30 years: “I started because I like the sea! I used to do spearfishing and I’ve always been connected to fishing. The picking of barnacles came as an addition, but as it is more profitable it has become a priority. ”

A daring boy with a taste for the sea, he began going to the sea without knowing how to swim to catch crabs and octopus, with his friends: “I was able to catch octopuses without touching them with my hand because they gave me shivers.”

Check also:  Spearfishing in the Algarve

He may have started at the Meia Praia pier with friends of the same age, but his passion for the sea made him perfect in diving. He quickly began to get invitations from older people who taught him to respect the sea: “Armandinho, Bataglia and Kita taught me a lot,” he confided.

“I was among the first to go to the captaincy to apply for the professional shellfish license [about 20 years ago]. Nowadays, despite being from Lagos, I can catch shellfish in the Parque Natural do Sudoeste Alentejano e Costa Vicentina. Today it is also necessary to apply for authorisation to sell in the auctions and outside them. ”

Only two things differ from previous generations of barnacle catchers: being protected from the cold by the diving suit; and the immediate information which the internet provides on the tides. Francisco says that in the old days he only went into the sea with the Spring tide, which occurs during the full moon or new moon: “in the neap tides no one would go, unless they lived near the sea (in Carrapateira or Arrifana) to watch if they were able to harvest. (…) Nowadays, from one week to the next I know if the sea will be calm … Whenever the sea is good, whether it be tide or not, it is my job so I go to all. ”

The dangers and the effort persists with each trip to the sea, such as the adrenaline in timing the ins and outs of the waves: “I was already badly treated by the sea and I have already saved many.”

Francisco Cruz is one of the 80 professional shellfish catchers working between Sines and Sagres, mainly in barnacle harvesting, but also sea urchins, mussels and spider crabs: “work with what the sea provides.”

This shellfish man is alone in the haze created by the waves crashing against the rocks searching for a reward of unparalleled flavour. He is one of the “warriors of the sea”* who knows what his passion is and lives it every day: “I see myself failing in many other things, but not in going to the sea”

* Also read: “Costa Vicentina of João Mariano“. One of the chapters of the Book Costa do Mar about the barnacle catchers and is called “Guerreiros do Mar”.

Mar d’Estórias recognizes the privilege of having this delicious treasure on our coast which would be unreachable if it weren’t for the brave shellfish catchers who risk their daily lives for the purest taste of the sea.

“FILHOS DE UM MAR MAIOR” – a film launched in 2014 by the Associação dos Marisqueiros da Vila do Bispo e Costa Vicentina. Francisco Cruz is a member of this association.