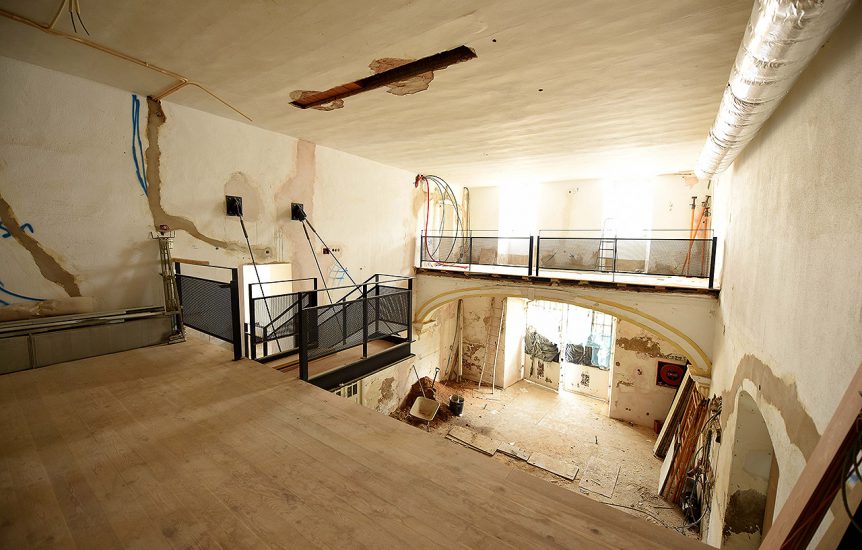 The road from a dream to reality is not always straight. There tend to be bends, detours and even some red lights on the way. The most important thing is to be persistent and to face the project as something processual.

From the idea of linking the sale of Portuguese products to experiences and stories inspired by the local and national culture, came the need to find the ideal location. When we were shown this place, we realised it was not only an 18th century building full of history in central Lagos but a place that asked to be more than just a shop.

The concept of Mar d’Estórias evolved into something multidisciplinary, which combines different sections of shop, café/bistro, events gallery and rooftop terrace Bar and showcases the best of Portuguese culture, history and society.

Initially built as the Church of the Lagos Maritime Association, throughout the years, the building was given different uses such as a winery and wine warehouse, a place of refuge and of great importance to the local fishing community. It later became the headquarters of the Lagos Fire Brigade having continuously survived the many sporadic uses but without a coherent functionality. For this reason and with the indispensable cooperation of the architect Mário Correia Martins, a profound connoisseur of the city’s history and architecture, an initial architectonic study of the building was made. This lead to an understanding of the background and gave the proposed intervention its characteristics.

On par with monuments of extreme historical relevance such as the Santo Antonio Church, the Santa Maria Church, the Slaves Market and the allusive Infante Dom Henrique Square, the Mar d’Estórias building has its own weight and historical significance that we could not disregard when proposing to convert it into a commercial and cultural space. We tried to restore and recover as much as possible of what was left and give back the dignity that it had lost over time.

The initial mission was to remove all the materials that corrupted the building, such as wooden sidings, aluminium structures, carpets and therefore revealing and highlighting the few original details that still existed: some barrel vaulted ceilings, the entrance arch that supported the church choir, a basin near the old altar (which we found), a room with a coffered ceiling, tombstone slabs, all things that we embraced as historical testimonies of the period.

In the following phase, the archaeological study allowed us to understand what materials had been used in the construction and identifying some more details of the building’s history. We used a mortar and non-invasive materials, appropriate for the restoration of old buildings, and in all the elements of construction and decoration, we used natural materials such as iron, stone and wood. Obviously, the whole building had to be adapted and equipped according to today’s requirements of comfort and security, as well as legal, always with the same objective: to leave clearly visible the historical weight and the evidence of the past.

Everything possible was done to recover the architectonical, historical and social identity of that which has become a place of commerce and Portuguese culture, by the sea and full of stories to tell. Welcome to Mar d’Estórias.