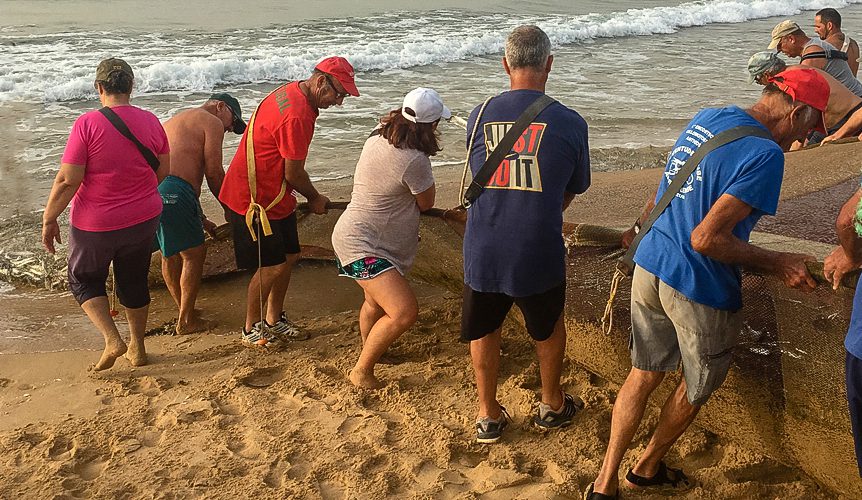 By Filipa Glória On 9 August, 2018 In Tradition

One of the oldest types of fishing in the Algarve continues to persist on the beach of Meia Praia by the only master of the Xávega art (traditional trawl fishing) who is still licensed in Lagos – José Glória, known as Mestre Zé Bala – the skipper.

The xávega is an artisanal fishery made by trawling from the beach, carried out by human force, with the use of a yoke, or, more recently, by tractors. Around here, the art continues almost the same as it was performed more than 100 years ago, with the human strength of a minimum of 16 people to pull the “calas” (cables used to draw out the nets).

Nowadays, a motorboat commanded by the Mestre and two other men is used, but in ancient times the “calão” (Mediterranean-influenced boat with a piece turned upwards, in the upper part) was used. This boat was pushed to the water and sailed, with oars, against the waves to catch the fish. Nevertheless, it is still with a rudimentary form “that the boat is slid by wood logs to the water, with the aid of a rope tied to the boat bow,” says Zé Américo, the skipper’s helper.

The tip of the “cala” stays on the beach and, from the boat, the nets are thrown to the sea to surround the fish shoals. Each side of the “cala” has about 600 meters, but it can reach 3 kilometres in length.

When the boat returns to shore, it is time to divide the people by the two “calas” and synchronise them to pull the nets so that the fish doesn’t escape the fishing net. To this end, all those who are helping on the beach attach, to the cables of the net, a kind of thick cable belt that they have at the waist and, at the command of the skipper on the boat, they retreat and pull the equipment out to close the fishing bag.

With all the gear on land, it is time to choose and divide the fish, an activity usually carried out by Zé Américo, from Praia da Luz. All the ones participating in this event receive fish. In fact, many of them already take their own bucket to fill. Of all those who join this event, some are tourists who are strolling on the beach and are led by curiosity to be part of the experience as well: “This is a friendly gathering”, says Zé Américo.

The event is accompanied by the countless seagulls that crowd the beach and try to catch some nibble from the nets – it is impressive to see!

This art persists, in our city, by the stubbornness of Zé Bala, who learned the trade with the people from Meia Praia and refuses to lose his license, bought in Salema 38 years ago, despite the existing bureaucracy: “To keep this license, every year he has to sell fish at the fish market for a few days”, says Mayor Joaquina Matos1.

During the summer months of July and August, the boat begins its journey at 6.30am and, according to the tide and the sea conditions, never ends in less than an hour and a half. In the remaining months, “depends on the weather and the will of the businessman.” 2

This activity, dated 3,000 years ago (according to the researcher Henrique Souto), was a survival method of local families – in other times women, children, unemployed and peasants participated in this trade. The tradition of Xávega art has, therefore, an immeasurable historical and socioeconomic relevance that, according to Mar d’Estórias, should be a candidate for Cultural Heritage of Humanity.

Moreover, given its importance, a proposal was approved in Municipal Assembly so that the Lagos Chamber could take the necessary steps to integrate this artisanal fishing art into the national inventory of Intangible Cultural Heritage.

1 Excerpt interview in Sul Informação Newspaper, in 2014.
2 José Garrancho words, in an article of Barlavento newspaper, 2011.