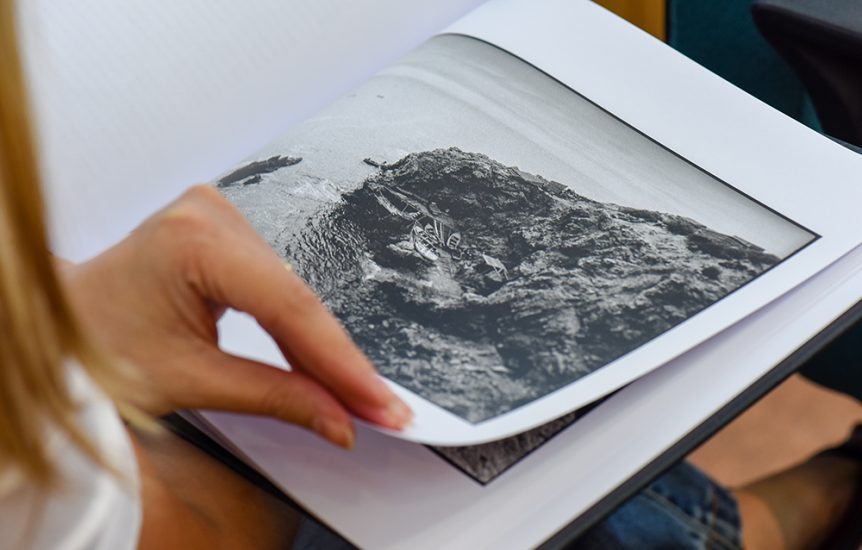 By Filipa Glória On 7 September, 2018 In Articles

The strong sense of belonging that Mar d’Estórias has for Costa Vicentina is shared, lived and captured by the photographer João Mariano who, for several years, has dedicated his work to capture the cliffs, the fury of the Atlantic, the natures details and customs of this piece of paradise that is the Costa Vicentina.

João Mariano feels and lives Costa Vicentina exclusively, through the lens of his camera. He grew up in a “place for patient people”, as he says, and made Costa Vicentina his home, so that his children also learn the importance of this place and its roots: “All I ever wanted to do was to give them a bit of what I had in my childhood “1.

This photographer, art director and photo editor is also the CEO of 1000olhos – Imagem e Comunicação. João develops projects between Aljezur and Lisbon, many related to the Southwest of Portugal.

His testimony and commitment to this region are invariably present in the long and profound tribute made in the book Costa do Mar. This book is a photographic inventory that cleverly combines a new edition of texts and photographs of the region. A new look at “a genuine and unrepeatable Southwest” 1 of people, landscapes and activities connected to the sea and land, in five chapters. Four of these rediscover images from previous books and the last, based on the photographic investigation for the Museu do Mar e da Terra da Carrapateira, presents unpublished images of the rustic shelter docks – Portinhos do Forno and Zimbreirinha (the last one disappeared due to weather and sea conditions):

– Guerreiros do Mar (1997-1998) portrays the life of the barnacle catchers who face the violence of the waves with only their harvest instrument – it is by the taste of the sea “that the men fight this unequal battle.” 2.

– Lugares Pouco Comuns (1993-1999) are, here, immortalized by the black and white photographs of João Mariano. A contemplation of the carved rocks by the sea and their geomorphological details: “I have already walked from the end of Rio Seixe to Cape St. Vicent (the most memorable walk … of unforgettable five days)”, comments João Mariano.

– Alambiques e Alquimistas (1997-1999) is a tribute to the aguardente producers, in the Medronho distilleries, that portrait the rituals of the production of this liquor: “The old copper still is capable of major achievements, but the rituals must be respected” 3.

– Trabalho de Fundo (1998-2000) is a project about the underwater catching of seaweed. It captures the physical limits of the seaweed catchers in the daily routine of submerged hours at sea: “It is a tremendous effort under circumstances to which a human being isn’t created for.”

– The chapter Museu do Mar e da Terra da Carrapateira (1998-2001) presents photographs that show how fishermen adapted to natural forces of the sea through the creation of shelter docks – such as the port of Forno and Zimbreirinha. The advantage of those who know how to obtain goods on the low tide to catch limpets, periwinkles, octopuses and sea urchins: “Experienced fishermen take these trails endless times, having discovered the most hidden nooks and crannies” 5.

This collection, now compiled in the book Costa do Mar, provides a rich geographic and anthropological journey along the Costa Vicentina. This book is a unique legacy of preservation of local heritage and recognition of our identity, which the Sea of Stories unequivocally supports.

1 Quote from João Mariano presentation to the book Costa do Mar.

2 Quote from Costa do Mar, Guerreiros do Mar.