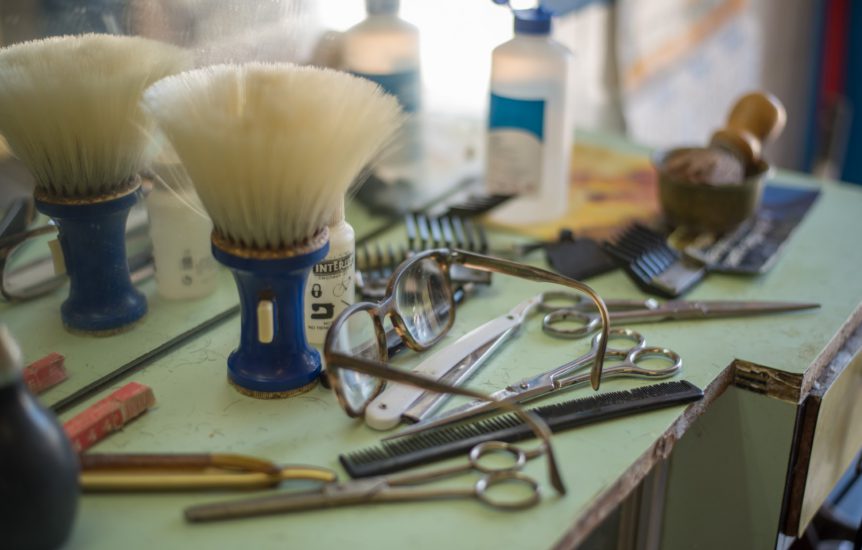 By Tânia Soares On 7 September, 2019 In Articles

The barber’s job counts on a big history already, and the centuries that are part of it are testimonies of this! But, for the record, nowadays, the beard of this profession is trimmed and takes wax so as not to go unkempt.

A lot of us are familiar with this profession, but not all of us! Only 50.4% of the population truly know about this job, if not for a profession intended only for male cutting. Barbers say that cutting a man’s hair is very different from cutting a woman’s hair, so, whoever claims to be a barber will never cut a woman’s hair. Who says this is the barber Armando José Paulo Gregório, a gentleman with four first names. He once cut a woman’s hair and asked her kindly not to come again. Armando, the barber, learned everything at 14 years old, in the same house where he works every day, starting early in the morning, the Barbearia Popular in Portimão, opened 63 years ago.

In the past, the barbers, besides facial and capillary hair cutting, wouldn’t stick around for a long time. They lived a nomadic lifestyle, and inside their bag, they would bring the cutting accessories and news from the neighbouring lands. Beyond the ability to increase the village’s virility, they also pulled out teeth, heal ailments and were still ordained to surgeons by the King in the year 1572. All barbers deserve respect, as they studied the pogonology of the plentiful beard, the stretched moustaches, the hide-ears sideburns for years, and at the end of the day there can only be trust in who slides the razor close to the symbol of masculinity, the Adam’s apple.

The contemporary barbershops gained popularity with houses in downtown, where the sound of the football report on the radio can be heard, almost in unison with the lords of reason discussing which is the best football team. Of course, this is an overall picture. In Barbearia Popular, the music of the Fóia radio station is played, but meanwhile, just a few meters away, in a barbershop run by Hélder Correia, rock music can be heard coming out of a stylish old radio.

There is an established cooperation between these two professionals, not caring about the age disparity, as 50 years separate Hélder’s and Armando’s lives, but their profession brings them together, and they both share the barbershop license. Mr. Armando intended to retire from the life of beard cuts and trimmings, but there was a proposal not to do it full time, and he could make some cuts in the Barbearia de Portimão whenever he wanted. He decided to not retire and not change the address of his workplace either, and has kept his barber chair in the n.17, next to Portimão’s town hall.

Barbearia de Portimão could be the barber’s museum, as it has a vintage decoration style, with relics from another time. But the cutting gained new techniques and men have no preference for a beardless face. We want harsh and bushy beards or maybe not bushy! Beards are trimmed, cared for with specific products, and proclaim the prestige of those who have them. In the Kings and Queens era, losing the beard was a humiliation and, maybe it is because of that that there are so many proverbs and expressions about this feature, as it continues to grow on male faces again.