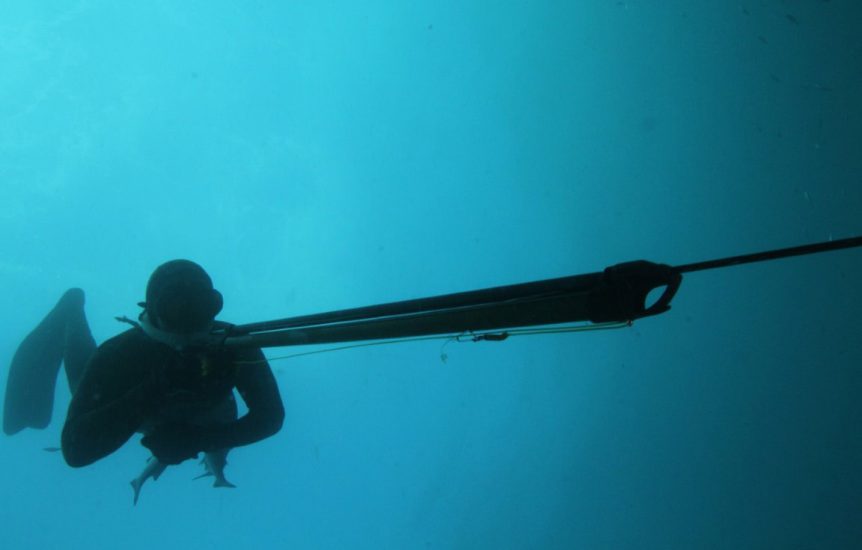 Spearfishing in the Algarve

The connection the Algarve community has with the sea is undeniable. From the Portuguese Discoveries, from the search for fish for family survival to the enjoyment of water sports, we always consider the sea an essential part of our lives.

So, it is not surprising that the Algarve has witnessed the birth of two people who make the sea their home and who have been distinguished by it: Teresa Duarte and Jody Lot, World Spearfishing Champions.

Mar d’Estórias spoke with Teresa, from Vila do Bispo, who says that “contact with the sea has always been very natural and I was, from a young age, taught spearfishing and bodyboarding.” The family relationship with the ocean was Teresa’s motivation: “My whole family from my mother side was always related to the sea. My grandfather and uncles were barnacle catchers. My mother and aunt have always liked to fish, my brother also does spearfishing. ”

Like Teresa, Jody, born in Lagos, thanks his father for pressuring him to start diving: “Around 7 years old, my father taught me to dive with his mask. I was full of fear and did not want to. But as soon as I put the mask on my face in water, I was amazed! (…). I never went back. “Jody recalls that he started diving with a mask and a trident and that by the age of 11 he had the first speargun. He would dive without a suit for half an hour, get out and cling to the warm stones of Ferragudo’s pier: “I still remember my mother calling from the pier.”

Some say that once in contact with the sea, the connection is never lost again. It turns out to be an inherent need for both body and soul: “the sea is my therapy, my psychologist,” confesses Jody. And what may be done for fun, turns out to be a way of life and subsistence: “I started to practice bodyboarding when I was 14 years old … I am now a barnacle catcher” says Teresa.

Teresa, 35, never had an ambition to compete in the spearfishing competitions, but there was an opportunity to enter the world championship in Sagres in September due to the lack of  “girls to compete in the sport.” On the other hand Jody, 37, always dreamed of being a National Champion and had many childhood idols: João Rosário from Portimão, Toninho, Rui Torres and André Domingues. I started to compete with my idols and gradually won! “. Incredibly, the National Spearfishing Championship was only won after the European Championship title (2011, Peniche) and World Championship victory, for the first time, in Vigo (2012).

It is important to note the spirit of unity and support of local communities to these athletes. There were many who contributed to Jody being able to represent Portugal in the World Championships in other countries: “When I was World Champion in Spain, I was 20 days in preparation. Some days were paid by the Federation, others I paid from my own money and the remaining days were paid with the help of the local communities of Alvor, Portimão and Carvoeiro. ”

These children of our land, but conquerors of the seas, respect the oceans and, like Mar d’Estórias, consider spearfishing one of the most ecological and sustainable sports. In this type of fishing, the sea itself does not allow more than “80 dives a year, much of it due to the visibility of the water, the waves, the tide and the rain”; “It’s a selective fishery and one that pollutes the ocean less,” Jody says. In addition to this, it is honorable for the spearfishers and the local clubs to organize garbage collection plans once a year, to reduce the garbage in the sea.