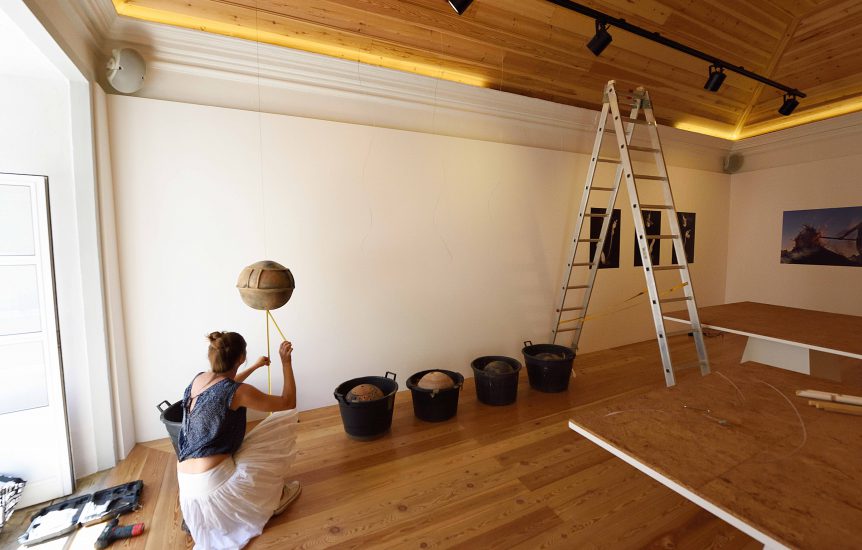 By Margarida Pimenta On 25 August, 2016 In Mar d'Estórias, Products

We could think of so many different things about this woman, who looks at the sculpture with a primitive curiosity, who sees in the forms and shapes of reality its inherent archeologic context. We could think about her aged and crusty hands, serious and imbued look, tired figure.

The person who cares about the link between hand and matter and who faces the sculpture as its «own privileged way of communicating», shows up with such a lightness, joviality and simplicity, that echoes in the one’ minds who reminds her or think of her.

Although Sara started its academic life in the architecture field, soon people became assessing that her success and maximum expression of talent would be regarding the sculpture. She ended by transferring to the Fine Arts School, from the University of Lisbon, finishing her degree in Visual Arts (2005). She has a PhD in sculpture since 2014 what, according to a teacher mentioned more than once during this interview, represented «a loss of an architect for the winning of a sculptress».

The first contact of the sculptress with the archeologic scope was in 2006, after doing a professional internship as a superior technical of Visual Arts, in the Portimão museum. «I was responsible for an archeologic replica with educational ends. From this episode, I remember the moment in which I had the chance to grab a small anthropomorphic representation of the Chalcolithic period [period between the Neolithic and the Bronze Age]», points out Sara, while assuming that this was the moment that was marking all the sequent professional journey.

This was the opportunity for the artist to realize what would her PhD investigation be about, which was about the ceramic production in the Neolithic Portuguese period. «To manipulate an object provides a particular way of knowledge, closer and much deeper than the one that comes from the visualization through the display cabinet in a museum».

Although her professional journey has been happening between creation, teaching and investigation, it is with this last one that Sara identifies with the most, and where she feels that there is a larger connection between different subjects «allowing to an artistic production and scientific reflection, gathering the initiatives from different ways of research, such as sculpture, archaeology and museology».

It was with the same lightness, joviality and simplicity from the day-by-day that the sculptress Sara Navarro has assembled the photo essay “From Magma to the stars”, at the events gallery of Mar d’Estórias. From the moment when the first vinyl was glued on the wall, to the day when the exhibition was running its course, the sculptress’ face had a large smile and her positive energy would reign across the gallery room, where it is possible to find an “experimental lab of investigation”, where the pieces are suspended by a wire and are separated from its original context, inviting for contemplation and thought».