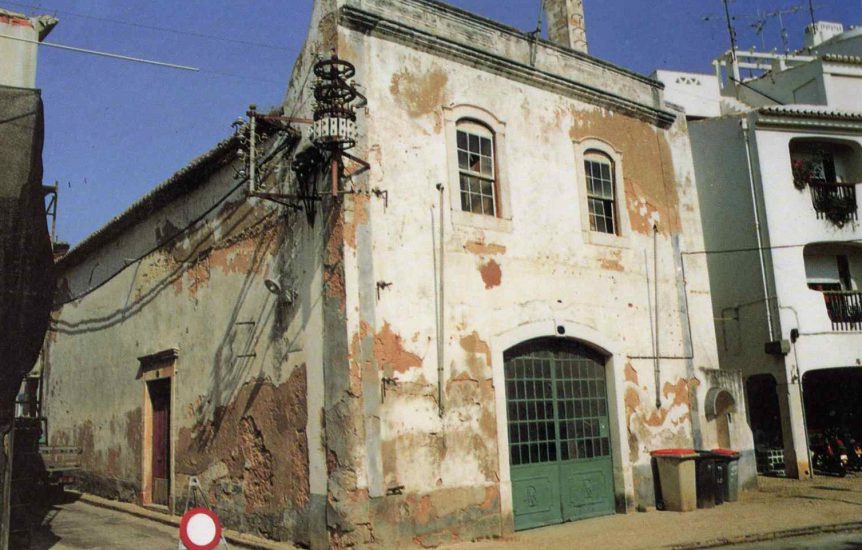 By Filipa Glória On 2 July, 2018 In Mar d'Estórias, Tradition

Mar d’Estórias is a project that bustles with ideas that are faithful to modernity, but very rooted in heritage. It is by knowing the past of our city that we also discover our history.
It is not surprising, then, that when we look at the classic book “Lagos, Evolução Urbana e Património” 1 (Lagos, Urban Evolution and Heritage) we find ancestral aspects of the building that is today Mar d’Estórias.

As we open this book, published by the Lagos Town Hall, we come upon a sketch of the main façade when it was still the Church of the Maritime Commitment of Lagos.

Perhaps because it was completely rebuilt after the 1755 earthquake, the outline of this church, of King Manuel I reign, is only a reconstruction (pic.1). In fact, the sketch was created by the Architect Eduardo Bairrada, according to notes of the local painter Jaime Murteira.

The beautiful entrance porch (pic. 2), with two carefully sculpted medallions, was the first manifestation of Renaissance architecture in the Algarve. This entrance of the old church was relocated in 1935 to the Municipal Museum, thus avoiding being destroyed by time.

In an attempt to embrace the past, we maintained structural details of the church, such as the Renaissance windows, the archway of the entrance that supported the old church chancel, some arched ceilings, a sink near the high altar, in stone, as well as a room with a coffin ceiling (pic.3), which had to be entirely renovated due to the advanced state of degradation.

Fig. 3 – The Coffered Ceiling Before and After

In early times (1916-1926), this space became a place of the seafarers of Lagos, the fishermen. It was a building used as a wine and cereal warehouse, but also as a tavern, which provided the preventive shot of medronho in the “pneumonia” era.

In the 20’s, the sporadic use destroyed the building’s characteristics. After that, it became the headquarters of the Lagos Firefighters, for 54 years (1932-1986). As a testimony of their presence, Mar d’Estórias preserved some details of the clear passage of these brave volunteers. In the niche, on the main façade, Lagos’ first telephone booth was set up at the request of the Lagos Firemen’s Association, in 1934.

The mezzanine, now dedicated to books and music, was the sleeping area of the building’s permanent keeper and, later, a sleeper room where the driver, the rescuer and three other firemen slept. The old lookout tower at the top of the building (fig. 4) remained unchanged, even with the massive transformation of the roof into a terrace bar, overlooking the bay. In the care of preserving the character and history of the building we also restored the old door of the firemen headquarters.

Pic. 4 – Old firemen lookout, before and after

We tried to maintain the dignity of this space, through a global intervention, with the precious collaboration of Arch. Mário Martins. Today this space is a testimony of the people who have passed through here; a heritage we hold to continue to grow. This is how we get to know better what we have always been, a place full of stories – a Mar d’Estórias.