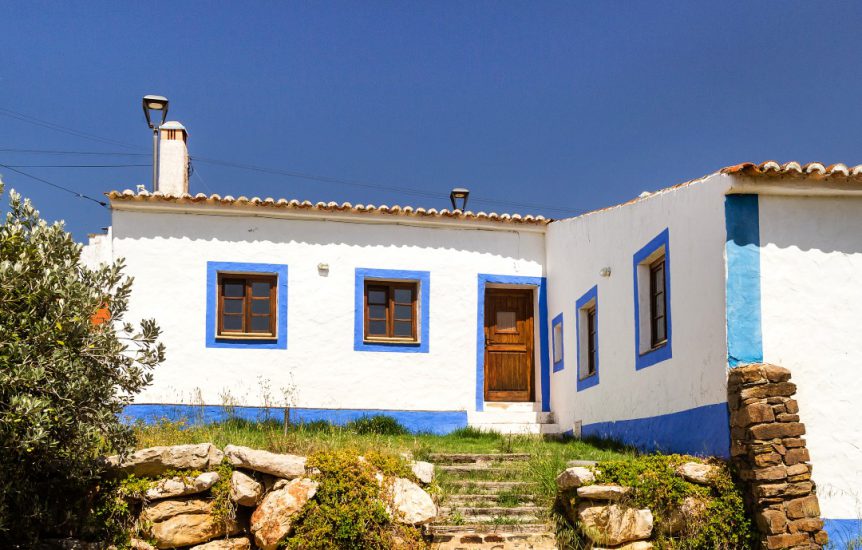 Traditional houses of the Algarve

Today, Mar d’Estórias will discover what makes a house typical of the Algarve. We will try to understand what differentiates the homes of the Algarve from others. The diversity that is reflected in the architecture, materials, techniques and forms of houses that incorporate, over time, external influences and experiences of its residents.

The proximity to Moorish lands and their eyes on the sea, the people of this coastal region, turned their houses into viewpoints. The Arabic-inspired roofs were designed to allow constant sea views, waiting for the return of the fishermen boats or to dry the regional products, like figs and almonds.

But what makes the Algarvian houses stand out? What stories do they reflect and what details do they harbour? When deepening the investigation, we have been able to highlight common elements that characterise the houses of the South of Portugal. We have to mention the coloured bars framing doors and windows and the whiteness of the walls, reflecting the sunlight in such a sunny region. “It is a house of the South, as in the South there’s the sun, an intense light.” 1 Mário Martins, who conducted a study on the power of colour in Algarvian architecture in the 1990s.

However, the most striking symbol of traditional Algarve architecture is undoubtedly the chimney of unique decorative details that translates the possessions and taste of their owners. Formerly people used to ask “in how many days do you want a chimney?,” i.e., how long the client wanted the work to take because it dictated the cost, but also its beauty and detail. More than useful, the chimneys were also decorative and began to gain importance in the Algarve, in the 1920s.

Traced, in the shape of a weathervane, dovecote, church towers, Arabic minarets, the chimneys were of intricate designs and of popular taste. Of all shapes and forms we distinguish the chimneys in three types, presented by the illustrations of Mafarrica2:

The truth is that the “typical Algarve” turned the chimney into one of the main symbolic elements of the region; the expression and synthesis of the “being an Algarvian” in the adaptation of the people to the diversity of the region. As is the case of the poetess Nídia Horta, who dedicates her writing to this identity symbol, in the CADERNOS DE POESIA DE LAGOS (Nª29).

has a special history …

It is the result of fantasy,

of these unique people,

of poets, of dreamers,

from the mountain and fishermen,

who turned to the heavens,

to ask for thanks to God

the smoke from their homes …

so that, in the house,

The Algarvian chimney, laced, embroidered, speaks of ancestors, who were sculptors of souls, anxious for happiness, serene nights, calm, without hatred or bitterness …

Chimneys of the Algarve,

of this Algarve all colour …

And, on the slippery tile

As a destination brand

From this Bedouin people …

If it has a crafted chimney on top it’s certainly an Algarvian house!

1 Mário Martins quote in an interview for the Diário Imobiliário.